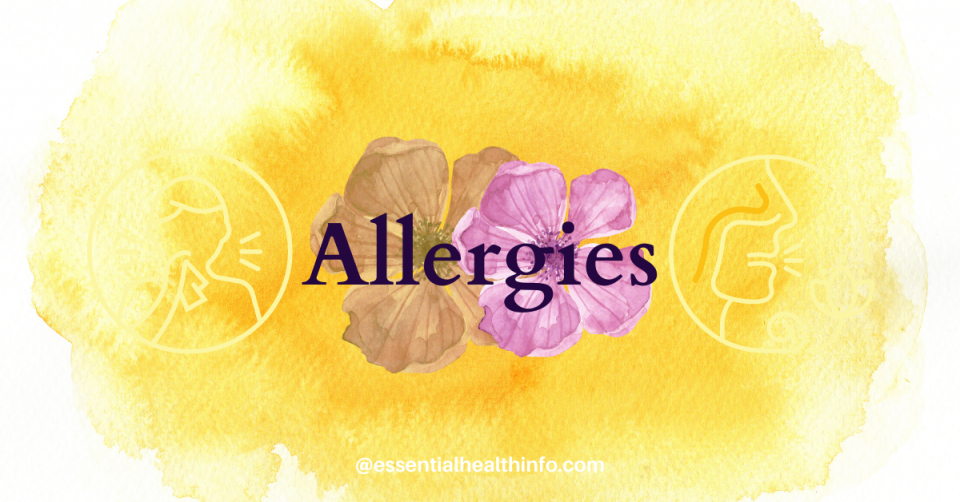 “It’s just allergies!”  Who hasn’t heard someone say that before?  When we think of the term “allergies,” we think of pollen, cat dandruff, and even food.  Moreover, let’s look at a textbook version of the definition.  An allergen is an exaggerated immune response brought on by inflammation (Professor et al., 2021).  Inflammation is a localized or systemic reaction of redness, swelling, and pain on the body.  Huh?  How are allergies connected to inflammation?  I’m glad you asked!  Just like Ms. Fizzle and her eager students from the Magic School Bus, let’s take a dive into the human body to discover and learn ALL about allergies!

Or, “bless you!” . . .  as we like to say in America.  We know that all humans have the potential to contract and develop allergies.  Some people start out with allergies while others develop them later in life.  Allergens are termed, ingestants, injectants, or contactants.  For example, ingestants are allergens we “ingest.”  Medical scientists call a portal of entry, (which shouldn’t be confused with the different dimensions and portals in space), the doorway that leads to inside the body.  Allergens typically enter through epithelial ports (nose and mouth), GI tract, and skin (pp. 410 ).  They can enter through thin and moist surfaces because of the area’s permeability, which means “easy to pass through” (2021)!  Even though the skin is lined with a tough coating (keratin), access can still happen through tiny breaks, glands, and even hair follicles (pp. 410).  It’s important to understand that when allergens are inside the body, they can infect organs and systems like the intestines and respiratory system.  For example, a histamine reaction is the body’s response to an allergy attack that’s going on inside.  To prevent confusion between histamine and allergies, we’ll simply talk about histamine in another article.

No matter which type of allergic reaction is at play, those pesky allergies are known to cause a range of minor and major reactions in our bodies.  Now, let’s discuss the first type of sensitivity to allergens from the environment.

The most powerful biological defense a human possesses is their immune system. Scientists term the immune system a “double-sided” coin since sometimes it’s response to an attack can both protect us and damage our bodies.  Hyposensitivity is the same as “overactivity,” that is in the form of an allergy or even an autoimmunity.  During this type of reaction, the body forms a defense that terminates anything in its path.  Type 1 Immediate Sensitivity is brought on by allergies and anaphylaxis involving mast cell activation, basophils (white blood cells), and allergic mediators (pp. 411).  According to scientists:

“One of the reasons allergies are easily mistaken for infections is that both involve tissue damage and can trigger the inflammatory response.  Many symptoms and signs of inflammation (redness, heat, skin eruptions, edema, and granuloma) are prominent features of allergies.” (pp. 411)

As mentioned before, by definition an allergy refers to an exaggerated immune response that is manifested by inflammation.  Allergic individuals are acutely sensitive to repeated contact with antigens, called allergens, which do not noticeably affect nonallergic individuals ().  Therefore, all humans have the potential to develop allergies under particular circumstances (pp. 411).

Whether we are hyposensitive or not, everyone experiences a “sensitivity” to allergens from the environment.  Matter of fact, we can ingest these allergens called inhalants.  These allergens are pollen, house dust, dander (shedded skin scales) or fungal spores from the environment.  Atopy is a Type I allergic reaction caused by allergens like pollen, insect venom, food, and dander (pp. 411).  All Type I reactions have the same characteristics (reactions to the allergies) from person to person.  The question to ask is, “am I Type I sensitive to allergies or do I have a more severe case?”  Let’s hope it’s neither option.

On the other hand, we can also experience anaphylactic (a systemic, unusual, and exaggerated allergic reaction) that affects two major systems of the body e.g. respiratory and cardiovascular systems (pp. 411).  Now, let’s look at the common allergens.

Common allergens are defined by their portals of entry.  There are four types:

First, inhalants are airborne or found in the environment, and include pollen and insect parts e.g. dust mites  It’s portal of entry is mainly through the mouth and nasal passage and it can affect the eyes, the sinuses, nervous system and respiratory system.  Geographic regions can harbor certain combinations of airborne substances.  For example, pollen is given off by trees and flowers and mold spores are released throughout the year.  Unfortunately, there are 300,000 types of molds in the world.  Molds produce spores, which spread by floating around in the air and can be found indoor and in outdoor environments.  Although there are many types of molds that can cause an allergic reaction, it’s important to know how mold spores get close enough for us to inhale it.  For example, dog and cat hair can pick up mold spores from outside as well as clothing.  Not to mention, paper products like wallpaper, ceiling tiles, wood, insulation material, and upholstery and fabrics.

Ingestants are common foods, otherwise called food allergies, that you would find at the grocery store such as peanuts, shrimp, and strawberries.  Food allergies are not the same as food intolerance.  For example, lactose intolerance is caused by an enzyme deficiency that breaks down milk sugar.  Also, other forms of food allergies can be found in eggs, shellfish, and even soybeans.  A typical portal of entry is through the intestines, but it can also affect the skin and respiratory tract.  Have you ever experienced gastrointestinal symptoms like vomiting, diarrhea, or abdominal pain?  If you have, then your symptoms may have been caused by a food allergy. Finally, other types of manifestations can include hives, rhinitis, asthma, and sometimes anaphylaxis (pp. 411).

The next type of allergy is caused by injectants. Have you ever been to the doctors office and had to fill out a form on allergies?  Did you notice that the drug, “penicillin,” was one of the choices for allergy?  Injectants are a type of allergy triggered by drugs, vaccines, hymenopteran (bee venom).  A well-known vaccine that includes chicken eggs is called the Influenza vaccine from the disease that causes the flu.  A person can be allergic to chicken eggs and would experience an immediate allergic reaction if they had taken this type of vaccine.

Finally, this type of allergic reaction is caused by contactants.  Also, it’s portal of entry is the skin or mucosa membrane.  Of course, this type of allergic reaction can be airborne such as fragrance mix, resins, and plants that come in contact with the skin or mucosa membrane (nasal passage).  The most prime example might be cat or dog hair dandruff.  Have you ever noticed irritation of your skin after coming into contact with cat or dog hair?  You might itch your skin and then observe raised red bumps.  In this case, your body has encountered a histamine reaction, the most profuse and fastest-acting allergic mediator.  Scientists explain this type of reaction:

“It constricts the smooth muscle layers of the small bronchi and intestine, thereby causing labored breathing and increased intestinal motility. In contrast, histamine relaxes vascular smooth muscle and dilates arterioles and venules, resulting in wheal-and-flare reactions in the skin and pruritus (itching)(pp. 411).”

In other words, the raised bumps on your arms along with the itching is your body’s response to an allergic reaction brought on by contactants found in the cat or dog dandruff.  The body is well prepared and powerful when it comes to preventing an allergic reaction!

Allergies can often be mistaken for infections or other health conditions.  To determine if someone is allergic, then a skin test or blood test will need to be done.  First, a skin test is administered in vivo to detect atopic or anaphylactic sensitivities in the skin.  This technique involves pricking, injecting, and even scratching a patient’s skin with a small amount of the allergy.  In patients with numerous allergies, allergist purposely inject allergens in the forearms or back intradermally.  The pattern will help the allergist determine the severity of the allergy if the skin has a raised bump, which dictates an allergic reaction.

Also, a blood test can be administered to a patient.  The most widely used blood test is a radioallergosorbent test (RAST), which measures levels of IgE to specific allergens (pp. 411).  By measuring elevated blood levels of tryptase, an enzyme released by mast cells that increases during an allergic response, the test can distinguish if the patient has experienced an allergic attack (pp. 411).  Furthermore, a differential blood cell count can reveal high levels of basophils and eosinophils, which indicates an allergy (pp. 411).

Finally, treatment and prevention of allergy (type 1 allergy) can be taken into measure.  For example, the patient can take drugs that block actions of these- lymphocytes, mast cell activation, and other chemical mediators like histamine.  The aim of anti-allergy medication is to block the progress of the allergic response somewhere along the route between IgE production and the appearance of symptoms (pp. 411).  Examples of drugs that a person might take are corticosteroids and Cromolyn.  Corticosteroid block lymphocytes and reduces the production of IgE.  Cromolyn blocks the degranulation of mast cells and reduce the levels of cytokines that causing inflammation.

The most popular and widely used drug to prevent symptoms of atopic allergy are antihistamines.  They interfere with the histamine activity by binding to histamine receptors on target organs (pp. 411).  Epinephrine will reverse a person’s constricted airways of the as a result from an allergic reaction.  Also, epinephrine will slow down allergic mediators.  This type of alpha- and beta-adrenergic agonists drug is injectable and gives the person time to get to a hospital for urgent treatment.  Other drugs that relieve inflammatory symptoms are aspirin and acetaminophen, which reduce pain by interfering with prostaglandin, and theophylline, a bronchodilator that reverses spasms in the respiratory smooth muscles (pp. 411).

One of the best ways to avoid an allergy is to simply “avoid” it.  First, allergy shots are a form of desensitization.  In fact, the shots are filled with the allergens as confusing as it sounds.  Some scientists suggest injected allergens stimulate the formation of allergen-specific IgG blocking antibodies that can remove the allergen from the system before it can bind to the IgE receptor (pp. 411).

A word on food allergies- some evidence shows that if children are allergic to fresh milk, having them consume small amounts in baked goods (in which milk is an ingredient) can help desensitize them (pp. 411).  When it comes to anaphylactic symptoms, peanut allergies are the main culprit.  Some new evidence has shown that “oral immunotherapy,” a treatment in which children were given increasing amounts of peanut protein daily, can sometimes cure the peanut allergy in children (pp. 411). For example, altering the way the antigen is presented (in this case, the dose; in the previous example, the physical form) can correct an inappropriate response (pp. 411).

Finally, this experimental strategy can either help a person or make it worse.  As the world evolves, some allergies might be the result of disappearing worms and protozoan pathogens in the developed world (pp. 411).  When it comes to immunity, the IgE participates with an allergy that naturally reacts to helminths and larger microbes (pp. 411).  For some years now, Scientists have experimented with using on-purpose infections a whipworm called Trichuris suis (pp. 411). The worms can establish a brief colonization in humans without causing symptoms, during which time the immune system responds, and in some cases seems to reverse itself so that it stops responding to the inappropriate antigen—the allergen (pp. 411).

Wow!  Who knew injecting whipworm infections could reverse a person’s allergic response? Therefore, it’s best to talk with your doctor or use home and natural remedies.  For the most part, everyone experiences allergies and it just may take some time to reverse your body.